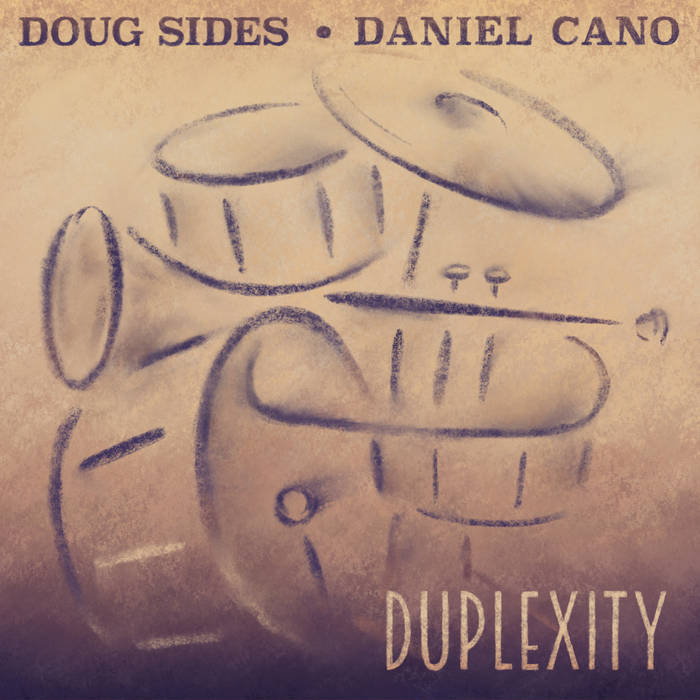 "This record bravely highlights the colours and capabilities of the trumpet & drums. A modern extension of the American 60's tradition in a rarely heard line-up."
-Binker Golding

"Duplexity is a fine showcase for the evidently strong relationship between a trumpeter whose warm, bright open tone evokes the hard-bop masters of the ’50s and ’60s and a drummer with a light touch and a supple sense of swing. Restricted means, in terms of instrumentation, but the result is a rich experience with no sense of austerity — or of overplaying to fill the spaces."
-Richard Williams

Trumpeter Daniel Cano and drummer Doug Sides are two of the most exciting jazz musicians on the South-East Kent scene. They’ve played together in various bands, are both regular participants at Margate's legendary Monday night Lifeboat jazz jam and often perform at venues including Ronnie Scott’s and Pizza Express.

With live music on hold throughout 2020, Cano and Sides spent a day at Ramsgate’s Big Jelly Studios during the space between lockdowns and recorded their first EP as a duo. All the ideas were lightly rehearsed to keep them fresh and recorded live in no more than one or two takes. They show the strong compositional themes combined with powerful rhythms and inspired improvisation, echoing former trumpet and drums duos such as Max Roach and Dizzy Gillespie and Don Cherry and Ed Blackwell.

Daniel Cano moved from Spain to the UK in 2014 and has since recorded two albums as leader, "Don't Touch the Blue" and "Social Music" for the independent Blue Asteroid. He was awarded a scholarship to the Banff International Workshop in Jazz & Creative Music in Canada in 2019. Cano is a featured soloist, composer, and educator, works with Canterbury’s Free Range Orchestra and is a member of the London Improvisers Orchestra.

Doug Sides was born in Los Angeles in 1942, and as well as being a premier jazz drummer is also a composer and arranger. Before moving to Europe in the late eighties he worked and recorded with artists including Lionel Hampton, John Handy, Abbey Lincoln, Jon Hendricks, Joe Henderson, Sonny Stitt, Blue Mitchell, Bobby Hutcherson, Chick Corea, Harry Edison, Cedar Walton, and Clark Terry. While living in Paris he worked with Johnny Griffin, Horace Parlan, Benny Golson, Kirk Lightsey and Hank Jones.

Produced by Daniel Cano
Mixed by Tony Platt at "Have ears..."
Mastered by Cicely Balston at AIR Studios
Recorded by Mike Collins at Big Jelly Studios on 19 October 2020
Artwork by Matt Goodsmith
Video by Martin Goodsmith
Many thanks to Adam Sieff for supporting and helping with this project

Daniel Cano (b. Huelva, Spain) is a trumpeter and composer based in the UK since 2014. He has performed at such venues as Ronnie Scott’s, Pizza Express, Philly Joe’s, as well as the Tangier, San Sebastian and Seville Jazz Festivals, with artists such as Doug Sides, Paco Charlín, Chris Kase, Dick Pearce, Harris Eisenstadt and the London Improvisers Orchestra. ... more

Bandcamp Daily  your guide to the world of Bandcamp